THE HEDONISTIC IMPERATIVE
Heaven on Earth? 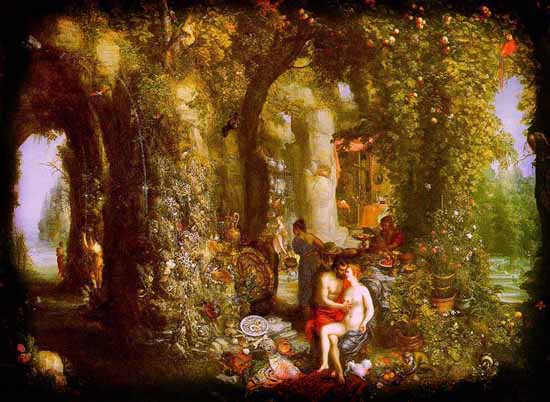 "At some momentous and exactly datable time, probably well before the end of the fourth millennium and possibly even the third, the last unpleasant experience ever to occur on this planet will take place. It will be, perhaps, a (purely comparatively) minor pain in some (to us) obscure marine invertebrate. For just as the smallpox virus was systematically hunted down to extinction, so the precise molecular signature(s) of aversive experience and its predisposing genes will be hunted down and wiped out as well. The systematic application of nanotechnology, self-reproducing micro-miniaturised robots armed with supercomputer processing power, and ultra-sophisticated genetic engineering, perhaps using retro-viral vectors, will assure the eradication of suffering in all sentient life..."

"Neurochemically, there's no reason why each moment of one's existence couldn't have the impact of a breathtaking revelation. The exhilarating sense of wonderment one might have gained, say, witnessing the Creation can become part of the fabric of biological normality. For our notions of what now passes for tolerably good mental health are likely to be superseded. Potentially, at least, the homeostatic mechanisms of an enriched post-Darwinian psyche can ensure "peak experiences" are as natural as breathing. Post-human ecstatics can be genetically pre-programmed to enjoy beautiful states of consciousness as part of the texture of everyday mental life. Sublime well-being can be transformed into an absolute presupposition of existence. Day-to-day living, if we so wish, can blend the exalted, life-loving euphoria of a potent dopamine agonist with the serene and mystical love of an empathogen such as ecstasy. Yet there will be no need to rely on toxic recreational drugs, nor even on sustainable clinical mood-brighteners, to induce such delights. This is because we can genetically hardwire the psyche with a spectrum of empathetic bliss as part of its constitution. Cloud-nine happiness can become the new biological default-condition of any advanced civilisation. For it is feasible to combine gene-driven states of incisive, goal-directed thought with a profound love and regard for others..."

"Our genetically enriched descendants may view us as little better than psychopaths. For our post-human successors will be able, not just to love everyone, but to be perpetually in love with everyone as well. It has been said that when we're in love, we find it astonishing it's possible to love someone else so much, because normally we love each other so little. This indifference, or at best diffuse benevolence, to the rest of the world's population is easily taken for granted in a competitive consumerist society - or on the plains of the harsh African savannah. Quasi-psychopathic callousness forms part of 'normal' archaic mental health. Yet our deficiencies in love are only another grim manifestation of selfish DNA. If humans had collectively shared the greater degree of genetic relatedness common to many of the social insects (haplodiploidy), then we might already "naturally" be able to love each other with greater enthusiasm. Sociobiologists would then explain why we all loved each other so deeply, not so little. Happily, in the future it will be possible to mimic, and then magnify out of all recognition, the kind of altruistic devotion to each other that might have arisen if were we all 100% genetically-related clones. Hints of a capacity for universal love can be glimpsed fleetingly today on the empathogen 'hug-drug' MDMA (ecstasy). Yet eventually loving each other to bits can become genetically pre-programmed. It can become totally innate. For if the right sort of psychochemical cocktail is automatically triggered whenever anyone one knows is present or recollected, then we can combine absolute, unconditional and uninhibited love for each other with the surprisingly uncommon capacity to truly love oneself... "

"An all-pervasive network of virtual realities will enable everyone to have their objects of desire fulfilled, and at minimal cost. Whether interactive or solipsistic, artistic masterpiece or pornographic wish-fulfilment, an ever-growing software library of virtual worlds will enable everyone to have their dreams come true. Yet on its own, such a scenario wouldn't, mirabile dictu, make most of us much happier for very long. The hedonic treadmill would still grind. For a revolution of rising expectations will eventually lead people to expect, as of right, to enjoy and enact any set of perceptions and narrative structures they choose. We'll expect to do so in virtual worlds with laws and body-images of our own choosing. In the absence of at least a minimal mesolimbic repair-job, then boredom, angst and other dormant negativities would periodically surface to spoil our ostensibly perfect idylls and utopias. For ironically, a mass migration into virtual worlds may come to represent Peripheralism's final fling. Only total control of one's notional surroundings may be enough to convince many people of the futility of pure environmental manipulation in chimerical pursuit of lasting happiness and fulfilment. The symbiosis of biologically programmed euphoria and mature virtual reality software engineering, on the other hand, is an awesomely good prospect..."

"For ultimately the real intellectual challenge won't lie in pure happiness-maximisation. After all, if eternal hedonism were the sole objective, then a rat with electrodes fixed in its pleasure-centres already points the way forward. In fact, our descendants may find generating generic states of life-long happiness per se trivially easy. The hard part is working out how to re-encephalise emotion in ways that serve us and not selfish DNA. In generations to come, a primary focus of neuroscientific mind-making will be on remapping the axonal and dendritic arborisation of the neo-cortex. The aim of this rational redesign will be to bootstrap our way into fulfilling our second-order desires for who and what we want to become."

"Today one can't responsibly advocate the use of psychedelics. The risks are too high. 'Bad trips' are an ever-present possibility. Informed consent is biologically impossible. For psychedelia is not just weirder than the drug-naive mind conceives, it's weirder than the drug-naive mind can conceive. One can't grasp, in advance, the nature of the sorts of experience to which one is nominally consenting. Yet in consequence of this taboo, quite astonishing alien state spaces of consciousness remain off-limits to most of us. Trapped in the squalid psychochemical ghetto of Darwinian life, we lack the necessary wetware to conceptualise radically altered states. We haven't even names for the strange new textures of selfhood and introspection their metabolic pathways disclose; and alas pure reasoning is impotent to access their nature because it lacks the semantic primitives with which to do so. Yet when the vertebrate genome gets rewritten, and genetically-preprogrammed bliss becomes the norm of mental health, our veil of ignorance can be safely ripped aside. Armed with exquisite designer-drugs, even the most outlandish realms of psychedelia can then be investigated in depth. The study of consciousness can become a true experimental discipline. And crucially, we can explore other-worldly kinds of mental life in the confidence that they will all, without exception, radiate the sparkle of earthly paradise...""

"The sensualist will discover that what had previously passed for passionate sex had been merely an agreeable piece of foreplay. Erotic pleasure of an intoxicating intensity that mortal flesh has never known will be enjoyable with a whole gamut of friends and lovers. This will be possible because jealousy - already transiently eliminable today under the influence of serotonergic drugs - is not the sort of gene-inspired perversion of consciousness likely to be judged worth conserving in the Post-Darwinian era. Better still, designer love-philtres and smarter sex-drugs can transform our conception of intimacy. Today's ill-educated fumblings will seem inept by comparison. Tomorrow's sensualists may opt for whole-body orgasms of a frequency, duration and variety that transcends the limp foreplay of their natural ancestors. Whether the sexual adventures of our descendants will be mainly auto-erotic, interpersonal, or take guises we can't currently imagine is a topic for another night. Profound love of many forms - both of oneself and all others - is at least as feasible as the impersonal emotional wasteland occupied by Huxley's utopians...."

"Within the next hundred years or so, and possibly sooner, biotechnology can be used to stop the animal holocaust. It will enable the human species cost-effectively to mass-produce edible cellular protein, and indeed all forms of food, of a flavour and texture indistinguishable from, or tastier than, the sanitised animal products we now eat. As our palates become satisfied by other means, the moral arguments against animal abuse will start to seem overwhelmingly compelling. The Western(ised) planetary elite will finally start to award the sentient fellow creatures we torment and kill a moral status akin to human infants and toddlers. Veganism, though not in quite the contemporary sense, will become the norm. And somewhat incidentally, the humblest snack will taste more delicious than the ambrosial food of the gods..." 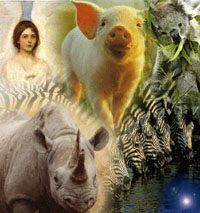